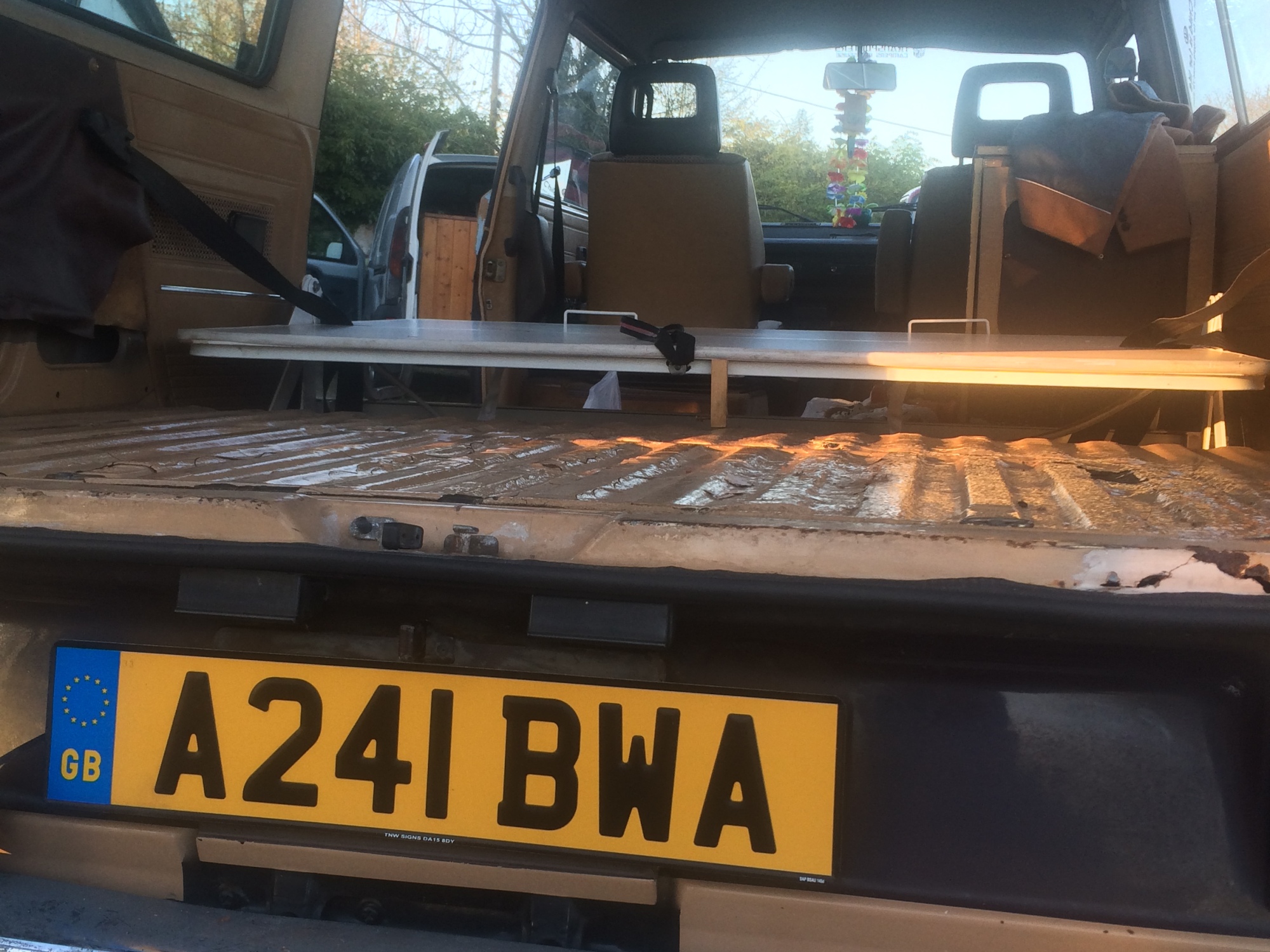 Where do we begin… The mechanical work we have carried out on this old bus over the past year has been somewhat substantial, some was essential maintenance and some was “preventative maintenance” but in doing so the pair of us have learnt so much about these vans it’s untrue but there is yet so much more for us to learn! I’m going to try and keep this section fairly light as I know some readers may find the mechanical side of things a little dull but if you want to know any more about the mechanical story then please feel free to contact us! 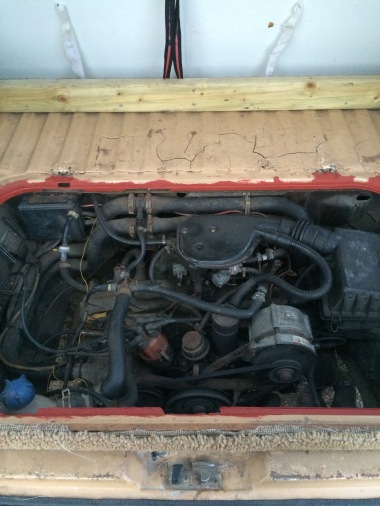 On purchasing the vehicle it was obvious that the coolant system was in need of some attention, Although it still has some of Volkswagens traditional characteristics being a flat four, rear engined, rear wheel drive bus it’s  a 1984 model so  one of the first petrol models to be water-cooled, in 1984 I suppose this was seen as “progress” but 33 years on (and counting) it created many issues that just aren’t there with an air-cooled model, we could go on for ages about the pros and cons of water-cooled and air-cooled engines but the fact remains it cost us a small fortune in trying to make the coolant system more reliable…

The initial list of parts was lengthy but as some of you may know, when opening a can of worms, a parts list can double.. On first inspection it was clear that the front to back pipes, originally manufactured from mild steel, that connect the engine at the rear to the radiator at the front, had seen better days and would need to be replaced with new stainless steel ones, whilst we were there we also replaced the front to back rubber heater hoses for safe measure! We checked out the radiator and all seemed well with no apparent leaks and no obvious blockages we were advised to leave it be and save ourselves a few quid.

On purchasing the bus we were aware of a small coolant leak within the engine bay that after a bit of humming and harring turned out to be a leak on the water pump bearing that only weeped at high revs spraying all over the engine bay which didn’t help in identifying where the coolant was actually coming from! So a new water pump was added to the parts list along with nearly every engine hose as all looked tired, with a lot of the bends collapsing and ends perishing, some might have lasted another thousand miles but this is where our theory of preventative maintenance came in. 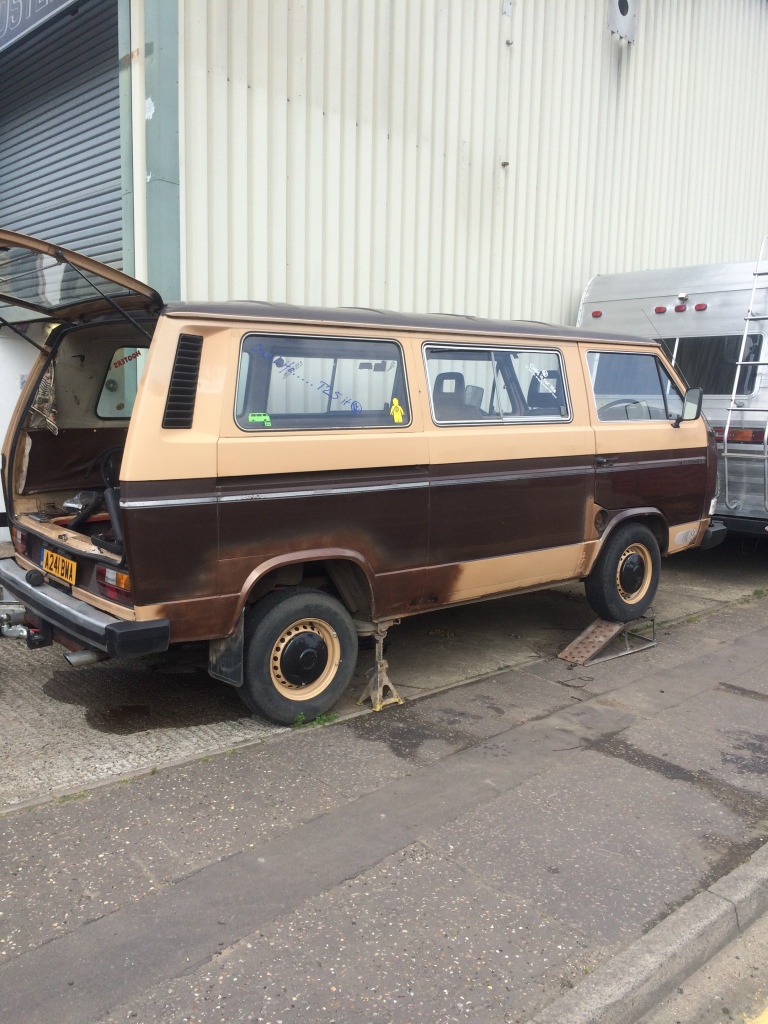 We were more than aware that replacing the fuel lines on these vehicles was a must due to the rubber perishing from the petrol itself, most people advise that this is done every 2 years but regular inspections aren’t a bad idea! When dropping the fuel tank we unfortunately (or I suppose fortunately) discovered that it had a leak on one of the seams so that was replaced along with a new level sender and seals. (Like I said earlier a “can of worms”). 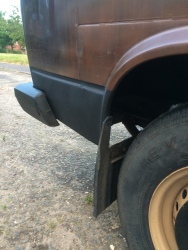 When we started looking at T25s we did ask questions on “what to look for” and after viewing one bus that had a non-existent gutter our Charlie seemed pretty damn clean! The chassis was spotless, the front and rear beams also free from rot, the “seam rash” was minimal and due to originally being a Caravelle with factory fitted windows only one small area of bubbling could be found… Whilst the bus was in the garage having the coolant system sorted  the MOT certificate expired which at the time didn’t seem a problem, we bought it with around 4 months MOT and the ticket was clean with no advisories, it’ll sail through we said… How wrong could we have been! The fail sheet was extensive to say the least and from talking to our trusted (and still trusted may I add!) MOT tester it was clear that the last MOT station that the previous owner had used was a little too “lenient” to say the least with “excessive corrosion” to ALL suspension mounts and well bodged sills it was decision time… By now we’d decided that Charlie was a “keeper” and that was the reason we’d invested so much into the coolant system, so really it was a case of whether we “patch him up” and carry on “patching him up” for  years to come or bite the bullet and do a proper job;  both of us being believers in doing a job right went for the second option and still don’t regret it! The guys did a cracking job replacing both of the sills, both bottom rear corner panels, sliding door lower outer skin and even patched the little hole in the drivers step! It seemed costly at the time but considering everything that was sorted it was actually a pretty fair deal!

Our test run from Norfolk to Cornwall certainly highlighted the need for us to turn our attention to the suspension and brakes. When we bought Charlie he was sitting fairly low on a set of -70mm lowering springs on the front and -50mm on the rear accompanied with a set of sport shocks that together gave the desired “nose down” stance which as smart as it looked proved to be a tad unpractical as soon as you moved off of the higher quality A roads. Every bump and lump in the road was felt on the our way down to Cornwall but the last straw was on our attempt to ascend the infamous hill of Lynton in North Devon which some of you may know… Building our confidence in the van’s capabilities through Exmoor we made a decision that the infamous hill was an achievable task, and if it wasn’t for the suspension I think we would have done it… We made a dash for the hill in second gear, the van pulled superbly but what we hadn’t banked on was the tight hair pin corner half way up with the most ridiculous camber! As I went to pull to the right to avoid the worst of the camber we were met by a huge tractor and trailer that was steaming down into the hairpin giving us only one option but to pull back into the corner and stop.. and stop we did! The tyre being on full lock had now nipped the front wheel arch almost acting as a secondary handbrake! With no chance of pulling away safely and with now a queue of impatient cars behind us the only option was to go back down.. backwards.. hazard lights on and a pumping action of the brakes returned us to the bottom of the hill. With the brakes well heated that was our first and last attempt at Lynton hill!

I think it goes without saying that on our return to Norfolk a brand new set of standard height springs and shocks were fitted almost immediately along with a full overhaul of the brakes for good measure! 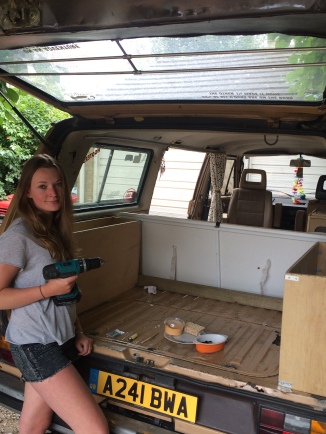 After going round a few shows and seeing uploaded photos on the Facebook VW T25 club, we gathered a bit of inspiration on how to utilise the space within the van. A popular option was to have a draw above the engine compartment/below the bed, which otherwise would have been wasted space. Some peoples set up is a 3/4 rock and roll bed with storage cupboards down one side of the van. Ours however was a full width rock and roll bed which was more designed for a day van so rather than removing what we had, we added storage where we could by building two small cupboards either side. This allowed us to keep the original bed frame and only made the top half of the bed slightly smaller. As you can see we were definitely carpenters in a previous life… but at least they do the job and allow us a lot more storage in the van now!