After feasting on chocolate for breakfast (it was Easter Sunday!) we left the campsite in El Saler and decided to visit a natural park which was right next to us on the map. Just a few miles down the road we found a layby with a beautiful view of Lake l’Albufera.

Parked up to take in the scenery and watched the fishermen out on the lake before Tris got distracted by a cool Spanish bloke on his motorbike. After taking some photos and having chat, we shortly left after him as the Easter traffic was starting to build up. 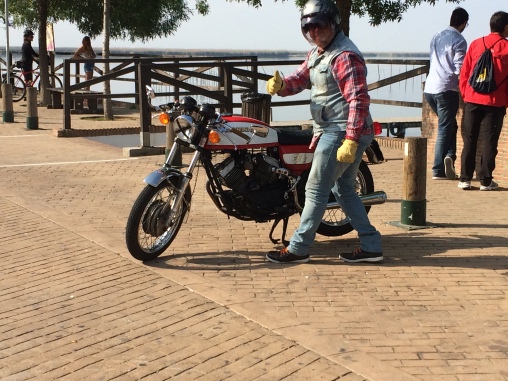 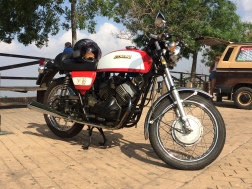 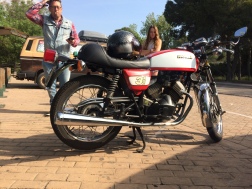 We took the V-21, V-23 and then got on the coast road N-340, drove for a few hours before pulling off onto a small beach where other vans had parked up just outside Alcanar. Soon after we arrived another T-25 pulled up next to us! Got talking (as you do when you own the same vehicle!) and he showed us round his van which he had done himself- nice setup with some pretty cool features! His two kids seemed pretty chuffed with it too! 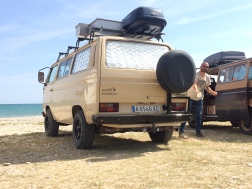 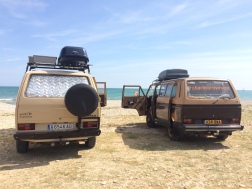 He carried on his way towards Barcelona and we decided to have a couple of hours in the sun.Tan nicely topped up we got back on the coast road and headed towards Deltebre where we knew there was a camper stop. Turned up to find an alright spot amongst an industrial estate but thought we’d have dinner somewhere with a view further on in the ‘Parque natural del Delta l’Ebre’. We were expecting a quiet, sleepy place however it seemed as if we had come across a hidden holiday destination! Restaurants and a few shops packed full of people as we drove towards the river where we parked up with a few other vans. By the time we’d finished cooking however the crowds had gone home so  instead of having a drink we took a walk along the river and agreed we definitely made the right choice to park here instead of the first spot! 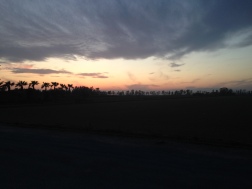 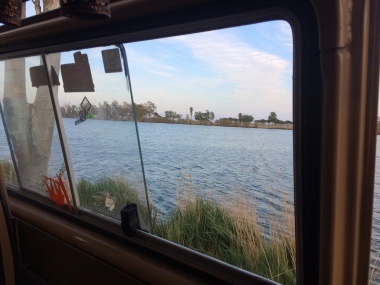 Drove back through the park in the morning in order to get back in the N-340. Ate quite a few more miles up whilst exhausting our CD collection before arriving in Cunit. Found a lush beach after doing a food shop and parked up to make some nachos… 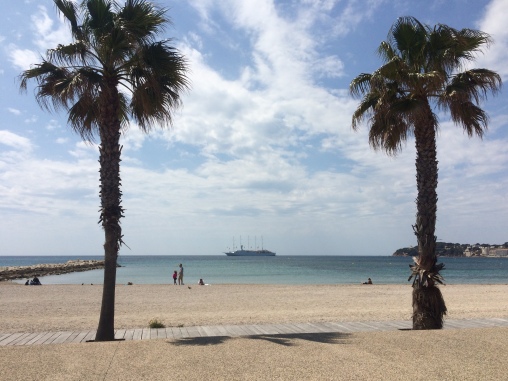 Turns out going for the cheaper chicken mince rather than beef wasn’t a great idea; bit bland and still looked pink even after cooking for 20 minutes… Still we ate it and with enough herbs and spices it was edible haha… And we didn’t get food poisoning either !! Spent the rest of the afternoon laying in the sun. We drove a little further in the evening to find somewhere to stay and came across a bit of rough ground where a few other vans had parked, one looked like it had been lived in for a while so thought we’d get away with a couple of nights! Took a walk in the eve and found we weren’t that far from a few restaurants and bars as well as a new marina. 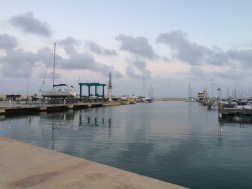 We even discovered that even a small place like this has a whole load of history! Turns out this area used to be a popular holiday destination for German tourists in the 1960’s. Some of the holiday homes still lined the beach!

Quite a few people were out for the bank holiday Monday and went to one bar which had a great atmosphere full of locals and the tapas was on point too; so good it convinced us to come back the next eve; after another day in the sun and sea, for the ‘Menu Dia’! 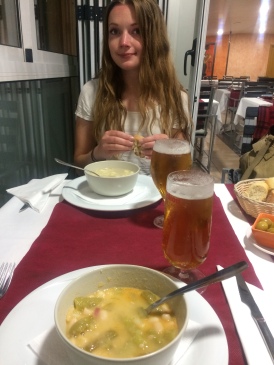 Left Cunit early in order to get to Barcelona to have a day of exploring. Took the C-31 into the city, part of the road ran right next to the sea and the traffic wasn’t as bad as we anticipated!  After finding one camperstop no longer existed (or we were given the wrong co-ordinates!) we ended up going to the more expensive one which turned out to be a glorified carpark with some showers and toilets(&not the friendliest of service :(! ).

Got the van parked up and bag packed before setting off into the city. Turns out Barcelona is a lot bigger than what we expected! Had a good trek before we reached the centre but allowed us to stumble across a crazy little flea market, a few monuments and even a vintage motorcycle shop (Tris fell in love instantly!). 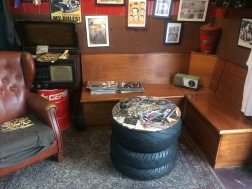 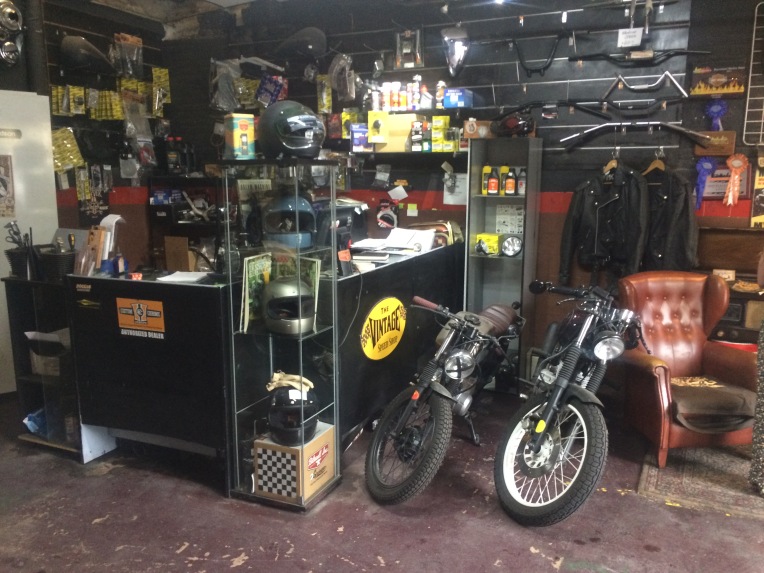 The ‘Sagrada Família’ basílica left us pretty stunned (didn’t go inside but the exterior was impressive enough!) as well as the fountain in the ‘ Parc de la Ciutadella’! 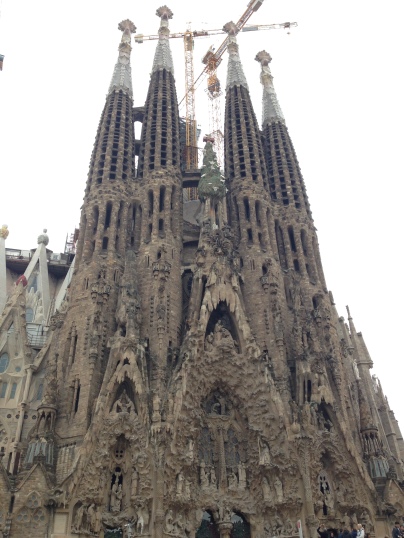 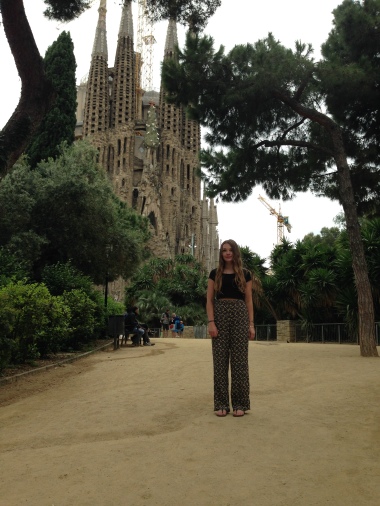 Had a can of beer each and shared a bag of Doritos for lunch (classy, we know!) before walking to the waterfront and seeing the vast amount of boats and yachts in addition to a huge lobster statue called ‘Gambrinus’! 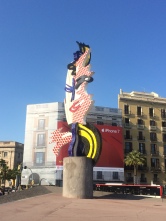 Tris at the Marina 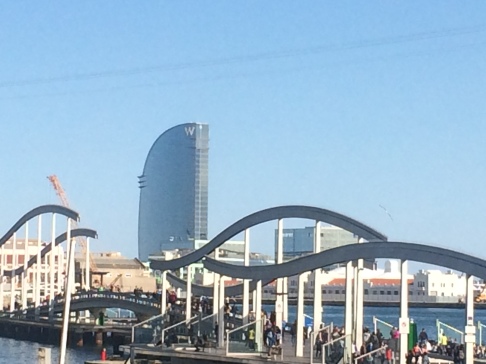 After writing some postcards we decided to head to the ‘Gothic Quarter’; filled with plenty of little boutiques, quirky craft shops and many restaurants and bars, we spent the rest of the day exploring the cobbled streets before stumbling across ‘The Travel Bar’. 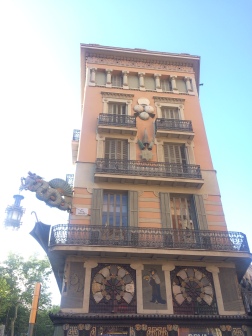 The bar had a good concept of being somewhere people could meet up and share their love of travel! It was already buzzing when we arrived but we soon found out (unbeknown to us!) there was a big Barcelona football match on which had attracted sports fans rather than travellers! Had a good atmosphere despite us not being big on football and we got chatting to a few different groups of people including Helen and Mark with their two boys who were on holiday – many thanks for the G&T you treated us too! We ordered the tapas platter which was huge and even we struggled to get through it all! 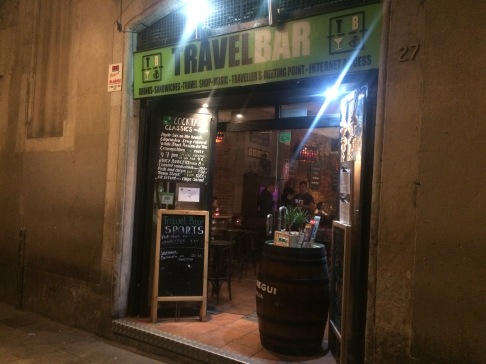 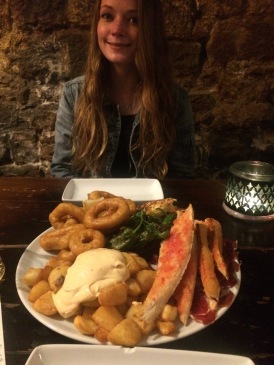 Full of Spanish delicacies, beer and gin we stayed ’til gone midnight before walking a good couple of miles back to the van (we missed the last underground train, time to get the hang of public transport!)! The city was all lit up and we even passed Barcelona’s ‘Arc de Triomf’!