Found a beautiful spot in Huy,Belgium after a fairly long drive from Diekirch,Luxembourg. Luckily there was a space for us and as we took in the river, bridge and stunning willow tree as the sun was slowly starting to set, we decided it was definitely time for one last BBQ before we went back to England! Made a dash to the supermarket (30 mins til it closed!) and bought burgers, pork steaks AND some sausages – looking back now maybe we were a little greedy but hey it was gonna be the last one! 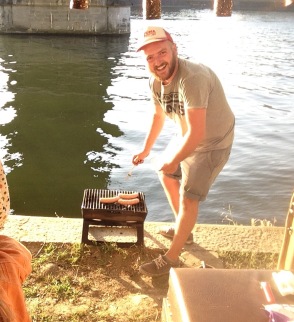 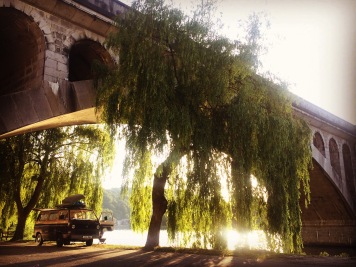 Spent all eve with food and beer in hand, watched the sunset and finally went to bed (absolutely stuffed) after a cheeky BBQ’d banana with Nutella. 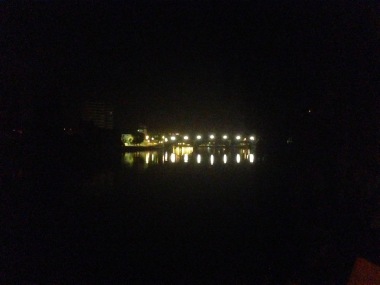 Lights over the river

We spent the majority of the next day driving; however we stopped briefly in Mechelen after eventually finding a car park, lack of change meant we could just about get an hour or so! Even in a short space of time we discovered it was a rather charming place filled with some beautiful architecture including Sint-Romboutskathedraal (St. Rumbold’s Cathedral) which towers over the city. 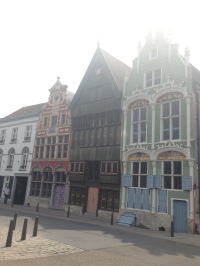 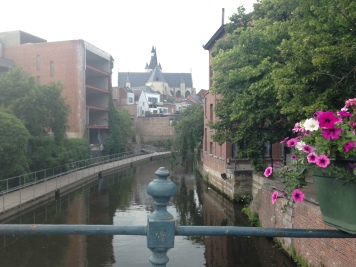 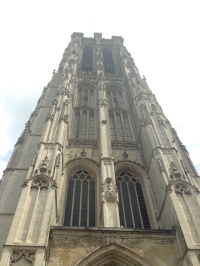 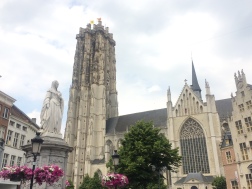 Got back to the van with literally a minute to spare before making our way to Gent. Was again a challenge to find a car park which had no height barriers, but nonetheless we found one within the centre… Luckily this one took card so no issues with change this time!
We absolutely loved our short (but sweet!) time in Gent;everywhere you looked there was something to see, filled with various architecture, a numerous amount of churches and cathedrals and even had a castle! 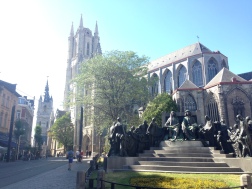 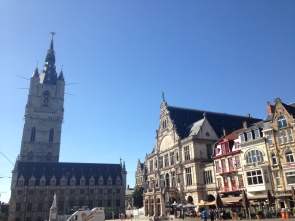 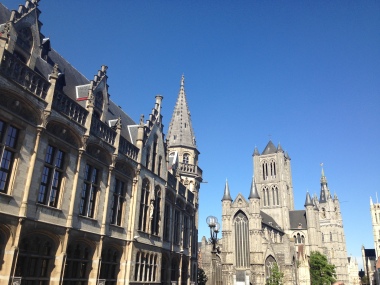 We were lucky to have a great summers day when we visited meaning the canal was full of life- the cafes/bars were full of people and the street was lined with students meeting up with friends. Joined the crowd and had a drink whilst soaking up the last of the sun. 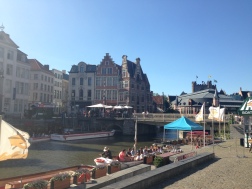 Unfortunately we couldn’t stay the night in Gent, but we have said we would definitely love to visit again – if you’re visiting Bruges it’s only a short train journey/drive away so no excuses! Parked up next to a river near Aalter-a small village conveniently situated between Gent and Bruges- our next planned city stop!

Knowing there was a campsite within walking distance of the city centre, we made our way to a supermarket to stock up on some beer and food before checking in. Spent the early afternoon having showers, cracking open a few Belgian beers and had some lunch.

The sun was out all day again and carried on into the early evening as we explored Bruges. Again there was plenty to see -intricate architecture on every street, canals reflecting the sun, squares filled with people and the picturesque Rozenhoedkaai (Quay of the Rosary).

In the great market square(used for markets since 958!); the Belfry of Bruges standing high about us, we bought a couple of portions of “frites” and came across the old fish market which was full of people- not surprising as there was an outdoor bar and a band on!Too good to miss!

Found a spot, got a couple of beers and enjoyed the music before noticing a lot of people were eating the typical Belgian mussels from a few stalls dotted amongst the crowds… After overhearing a woman saying they were running out we quickly made our way to the stall and we were very jammy! As the man only had two remaining portions left he gave us both for the price of one! They tasted amazing and were washed down with another pint before heading back to the van through the lit up city.

Checked out of the campsite around midday and made our way to Ostend (Zo used to work with a woman who was born and raised there!) Sun still shining, we planned on having one last beach day. Parked the van up and Tris made a “sofa”in the back out of our duvet and cushions so both of us could look out to sea whilst eating lunch. Laid on the beach all afternoon and even had a swim too.

We then drove into the centre later on in the day to find a carpark; we were really lucky and found one that only charged ’til 8pm. We put 2 euros in to cover the time we would be there before 8pm, we actually got a ticket ’til 9am the next morning! Seeing as it was our “last night” we thought we’d stay in the carpark and chance it! Zo text her work colleague who gave a few pointers where to go including the old square, the cathedral and obviously the long beach promenade.

After an ice cream whilst discovering some amazing sand castles which were for some sort of competition, we then were recommended  ‘Den Artiest’ – a restaurant which “we had” to try the ribs if we got a table! On arrival we already were impressed – the old wooden bar, quirky furniture and decorative ceiling made an impact instantly and the smell of food was amazing! A flame grill was suspended from the ceiling and all sorts of meat were being flung onto it and cooked by a passionate chef. The barman got us a table along with a couple of strong Belgian beers and we ordered straight away as we knew what to have! 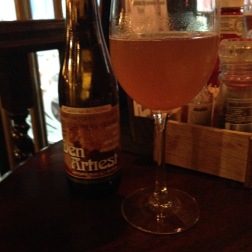 We can now back up the ribs – they were amazing!A great way to celebrate our trip over the last four months! 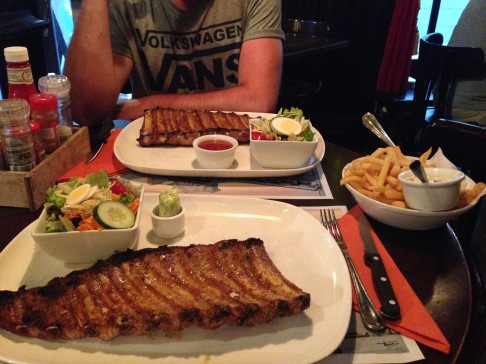 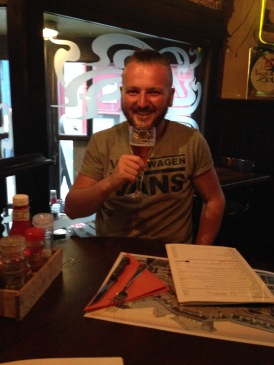 Slept in the carpark with no trouble and promptly left in the morning to ensure our ticket didn’t run out! We made our way into France following the coast before stopping briefly in Dunkirk (needed to send a French postcard back home to complete the collection as we didn’t get one on the south coast!)

All shops were closed and pushed for time due to our ferry leaving, we then headed to Calais. Found a shop along one of the beaches – completely packed with people as it was another glorious day! Postcards bought , our final stop was the ferry terminal for our return to England. Zo’s friend was getting married, Tris had some work on and the van needed some TLC along with a service! We waited in the queue to board, going over all the places we’d seen and people we’d met in the past four months. We’d had the most amazing time and the best thing was, we knew we’d be back out doing it again…. 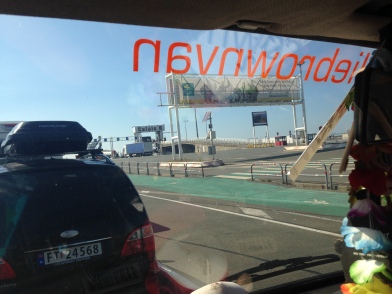 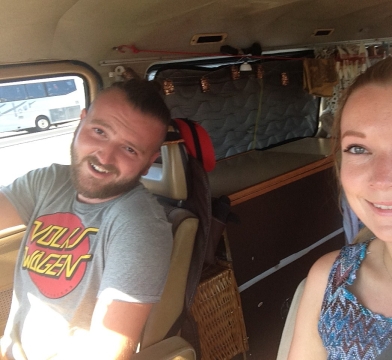 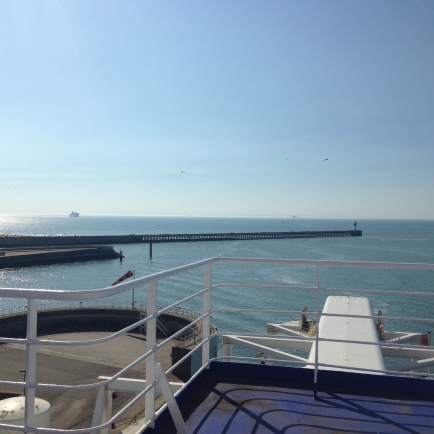